A couple of weeks ago, I made a post on the study materials I planned on leveraging to learn how to program for the Microsoft HoloLens. This weekend was the first time I finally started digging into studying. I quickly identified that the videos I intended to use might have been a bit off on exactly what I wanted to learn.

To be open and honest with everyone with my adventure, I wanted to share this and point you towards the resources I’ve decided to leverage instead. As I had mentioned in the last post, My Microsoft HoloLens Adventure – Preparing Study Resources. I had looked over some Basics videos back in March when I first started looking into this. I hadn’t touched those since March as I was getting kind of bored with it and it was all I had done when I was in college.

The next section in that post was Universal Apps, which I had never worked with. I started watching the Developing Universal Windows Apps with C# and XAML video. I quickly realized that it was going to be too high-level for me since I had such a limited experience. I tried searching for the videos they mention at the beginning of that course but was unable to find them on MVA. However, I was able to find Windows 10 Development for Absolute Beginners. In the first 10 minutes, I was able to figure out how to get my first 2D Application running for HoloLens. Yes, all it was is a button that shows text that says Hello World, but it was an app!

it’s been over two weeks since my last post; however I have an excuse! It may not be a good excuse, however I went on a vacation to beautiful Las Vegas and shockingly decided I didn’t want to do anything computer related while out there (who would have thought?) Also before you ask – no I didn’t take the HoloLens to Vegas with me – in retrospect I think I could have made some decent money if I had and let people take pictures with it, everyone dressed like Mickey Mouse and Minions on the strip seem to make a good of enough of a living!

Anyway, I have now been back to reality for about a week and it is time to get my butt back in gear! So let’s talk the well over-due first impressions I need to share regarding the Microsoft HoloLens.

Disclaimer: Before we dive into my first impressions I do want to call out that this device is designed as a developer build – this is by no means a final release of the system or designed for consumer use I will reference this throughout my comments because I am not being as critical as some may have been on this device.

My Microsoft HoloLens Adventure – First Impressions of the HoloLensRead More »

As I continue my adventure of learning how to program for the HoloLens, the first step is actually learning how to program! I am lucky enough that I took some programming classes while in College and I’ve done a lot of Scripting in Windows PowerShell – this helps me understand programming constructs. I just need to become more well-practices in the area of Object Oriented Programming and understanding the C# Syntax.

To do this I actually started digging in a bit back in March covering some of the basics to refresh my memory. One of my favorite resources is the Microsoft Virtual Academy. I haven’t watched much but the first video I started watching was Bob Tabor’s C# Fundamentals for Absolute Beginners. As the subject says this is for absolute beginners so I’ve done a bit of skimming on a lot of the videos, but it gives a good introduction if you haven’t programmed before. I most likely will continue to skim these videos occasionally just to keep my mind fresh since I haven’t written a full blow application before.

The next video series I intend to watch is the Developing Universal Windows Apps with C# and XAML. The reason I am wanting to check with video out is my applications I want to have work across all Windows Platforms – this is something I’ve never done so it’ll be a challenge to pick it up. The nice thing about using this as a stepping stone is Universal Apps will not only work on HoloLens but also Windows 8+ Windows PC’s and Windows Phones.

When developing for the HoloLens there are two different types of app models, let’s explore each one.

2D HoloLens apps will be the easiest ones to build – at least I think it will be for me. These apps are just like any other Windows Universal App, except the HoloLens will project the 2D App on a wall, or in front of you while using the HoloLens.

To make 2D Apps on the HoloLens I am intending to heavily rely on the Developing Uniersal Windows Apps with C# and XAML that is referenced under Universal Apps section.

In addition to the video the Microsoft Dev Center also has a couple of pages on building 2D Apps.

Holographic Apps are a very new concept – this is what makes the HoloLens a truly magical experience. You will see 3D renderings throughout your house, office, or where ever you are using the HoloLens at.

To start developing for HoloLens you must understand the different ways to interact with the HoloLens. This includes

To get a better understanding of the ways you interact with the HoloLens I suggest taking a look at the Development Overview video from Microsoft.

As I continue my adventure with learning how to develop for HoloLens I’ll make sure I share more information as I find it. 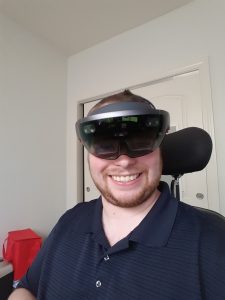 To develop for the HoloLens doesn’t require that you have a HoloLens – although it does make it more entertaining! If you do not own one do not fear – you can download and install the HoloLens Emulator.

To build holographic applications you need to use the Unity HoloLens Technical Preview – this gives you the ability to place 3D Models into your applications to be treated as Holograms.

Reflecting on Ignite 2015 – The Good, The Bad and The UglyRead More »