it’s been over two weeks since my last post; however I have an excuse! It may not be a good excuse, however I went on a vacation to beautiful Las Vegas and shockingly decided I didn’t want to do anything computer related while out there (who would have thought?) Also before you ask – no I didn’t take the HoloLens to Vegas with me – in retrospect I think I could have made some decent money if I had and let people take pictures with it, everyone dressed like Mickey Mouse and Minions on the strip seem to make a good of enough of a living!

Anyway, I have now been back to reality for about a week and it is time to get my butt back in gear! So let’s talk the well over-due first impressions I need to share regarding the Microsoft HoloLens.

Disclaimer: Before we dive into my first impressions I do want to call out that this device is designed as a developer build – this is by no means a final release of the system or designed for consumer use I will reference this throughout my comments because I am not being as critical as some may have been on this device.

For the lazy amount the group I will say overall the device is shockingly stable, runs pretty well and has been interesting to use. The device has great packaging. It is well built and the carrying case can take abuse. To make the device fit comfortably you need to play around with it a bit, but once you get it right you love it. Gestures are cool, but if you binge use the device your index finger will get tired. The interface is simple and easy to learn, plus the world is your screen. Finally the hardware is mediocre but performs well. There is room for improvement with the field of view, and from a hardware spec standpoint – but no complaints overall.

The package of the HoloLens isn’t super important; but I wanted to provide as detailed of a first impression as possible. It was delivered in a standard cardboard shipping box, with pretty thick cardboard. Inside of the shipping back was the actual “retail” packaging the HoloLens comes in. I put retail in quotes as I have mentioned above this device is not designed for consumers yet and is just a developer build. The retail packaging is a semi-gloss black box that felt very apple-esque which Microsoft has been doing with a lot of their products for the last 4-5 years.

Of course one of the first things you see are the instructions, which you will quickly discard and then hunt for later when you are ready to put the thing on! Under the instructions are a micro-fiber cloth, the power cables and some optional head straps for the HoloLens. All of the above are centered in the middle of the HoloLens itself.

You can see all of this for yourself in my unboxing video below.

Upon opening the box I was greeted with the carrying case which felt very sturdy and I may have accidentally tested how sturdy it was the very next week. Long story short I kind of crushed the case between the electric seat in my car and the door – I put a decent dent into the case, panicked opened it up and the HoloLens was fine, I was even able to pop the dent out of the carrying case with minor cosmetic damage to the case – see the below picture. 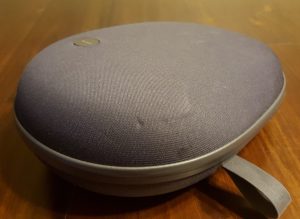 The device itself is surprisingly light considering it is a full-on computer that sits on your head. Upon initially picking it up I was a bit worried how light it felt meant that it’d be flimsy and easy to break – I haven’t put this to the test and have no intentions to, but overall I’ve gotten much more comfortable with it and believe it is much more sturdy than my initial expectations.

With anything that comes with wearing it comfort is a huge factor, and on my initial use of the HoloLens I was really worried. I haven’t posted the video (yet?) however when I first fit the device to my head and started doing the HoloLens setup after about 5-10 minutes of wearing it became fairly uncomfortable, my head kind of hurt. Once I got through the Windows setup I went ahead and tried re-fitting it to my head and found it much more comfortable. Just like anything you wear proper fitting is extremely important. Now that I have gotten better at using the device I’ve found it very comfortable; but it does take playing with it a little bit to find your perfect fit. Now I’ve also let other people try it on and trying to fit it on another person I am terrible at!

Other then actually wearing it using it also has some comfort levels. After using the device for about 2 hours I started to feel some motion sickness; I took the device off for about 10-15 minutes before returning to it and I felt much better. I haven’t run into this since the first use so I am kind of factoring it to a learning curve as I’ve done 1-2 more long sessions with the device with no problems.

The second gesture is known as the Bloom, this gesture is completed by placing all of your finger tips together on one hand with your palm facing your face. You then spread all your fingers apart like a blooming flower – you feel kinda goofy doing this gesture, at least I do.

To get a better understanding of these gestures in action I recommend taking a look at the Microsoft HoloLens video below.

In addition to gestures you can use the clicker that comes with the HoloLens, a Bluetooth keyboard and/or mouse. The mouse interaction was just added recently. I’ve not used the keyboard/mouse connectivity yet, but I have used the clicker and it is an easy way to keep your index finger from becoming tired during your HoloLens binge

Have you used Windows 8+ or Windows Phone 7+? Well you are familiar with the interface then! It is a very simple tile interface that you interact with. The major difference between those devices and the HoloLens is you have an initial start menu that pops up in your field of view, and when you go to launch an application you have to pin it to a wall in your home/office. No more complaining about having a start screen you Windows 8 users! The world (my living room) is your start screen! Check out the below screenshot to see what the interface looks like. Please note that the graininess of the photo is how the screen captures come out, the interface itself is actually much more crisp and clear than that. 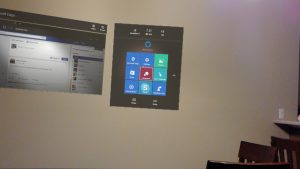 Now time to get down to the details. As I’ve mentioned previously I am not being as critical on this hardware as it is the developer edition. I do anticipate many optimizations and hardware improvements before this becomes a consumer device and is used by the masses. I’ve seen complains about the field of view with the device in other places and I have to agree to some extent – when wearing the device the field of view feel extremely small and it’s annoying that the app gets clipped. However when you see the screenshots it’s a decent looking field of view and for the first pass on the hardware is pretty good. I’d love it to be all of my field of view consumed with holograms – but it isn’t at this point.

From a raw specification standpoint you peg the CPU and memory pretty frequently – but it doesn’t lock up the entire operating system. I will openly admit I haven’t looked at how the device performs since the May 2016 update was released but I am hoping the Multi-tasking that has been added corrects a lot of my concerns surrounding running multiple applications and they refresh without having to click into them.